skip to main | skip to sidebar

Last night was the opening of "Raw Talent", an exhibit showcasing the entrants' photos from the 12x12 Vancouver Photo Marathon. So, I finally got to see the rest of my photos, which are now publicly available on the 12x12 Flickr group's collection entitled Raw Talent. And now it's time for me to reflect on my photos and see what I've learned.

8AM: "Your Entry Number" 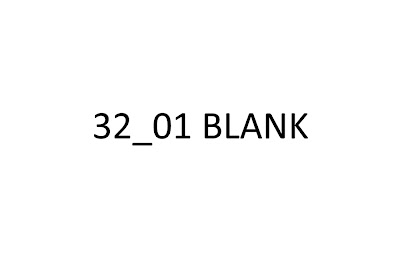 My entry number was 32, and I decided to take the paneling off of an old PC and photograph the processor (being a 32 bit version, like most machines.) Geeky? Yes. Imaginative? Undoubtedly so. As it turns out, I screwed up loading the film and this frame was destroyed before I released the shutter. I discovered my problem: the camera manual recommends winding the film back slightly after engaging the lead tab, to take up the slack. I probably over did it, winding exposed film back into the canister. Given that there was enough room at the end of the roll for 2 more shots, I should have just played it safe and started on the second frame. Live and learn. Because of this mistake, I was out of the running for best series. 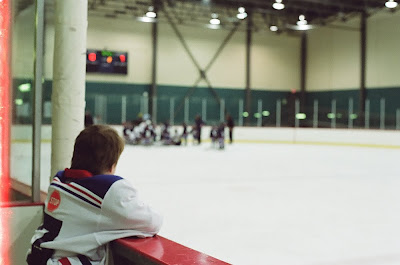 My aim was to visit the new hockey arena at UBC, hoping they would have the olympic logo on the ice which I would photograph (symbolizing high hopes for our olympic hockey teams.) I was pleased to find that a youth hockey practice was in progress. This guy was waiting for his practice to start. As I was framing, he turned around and noticed me, and backed up to get out of my way. I assured him that he was OK standing there, and when he returned, I quickly took the shot. Given my haste, I'm happy at how well it turned out (my notebook expresses some concern.) On the left you can see the burned edge of my destroyed first frame. I haven't yet decided whether this adds to the photo or takes away from it.

This photo was 1 of 4 grand prize winners, and is printed on a 90cm x 60cm piece of gallery quality canvas, courtesy of Opus. It will be displayed along with the other 3 winners in the Vancouver Lookout beginning in March. Go check it out. 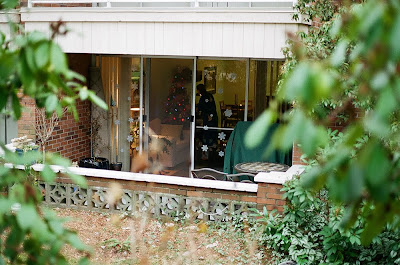 Like other contestants, I decided to take a photo peering through some foreground elements at some unaware subject (in actuality, it is Jen, and she knows I'm there.) I had my flash with wireless trigger stashed in the living room to highlight the subject. After several successful "test fires", the flash failed to fire on the real shot. I think my batteries were low and the recycle time was lengthening from the repeated firing. Lesson 1: always have fully charged batteries when it matters. Lesson 2: one test fire is enough!

Even if the flash did go off, I don't think it would be a very attractive photo. Too much clutter and a big ugly white rectangle at the top. I should have worked harder to find a closer peering location, and involved more out of focus foreground foliage to cover up the unimportant background elements. 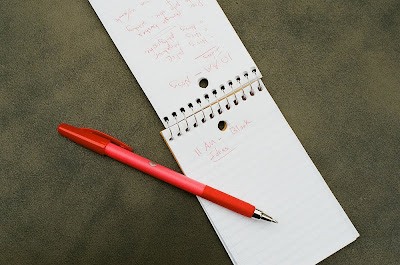 Returning to Blenz in Yaletown for the next theme announcement: "Blank". This is a photo of my drawing a blank, while jotting down theme ideas in my notebook. In other words, my concept is a lack of a concept. I had originally set the notebook on one of the white marble tables outside of Blenz, before moving to a location with a darker table to provide some contrast. I wouldn't have thought of doing that without the constraint that I only get one chance at the shot. Digital photography spoils us that way. There's no cost per shot, and we can turf the ones we don't like: so just snap away and eventually some keepers will fall out. Think long and hard about your photo before pressing the shutter and good things will happen. It was my epiphany of the day. 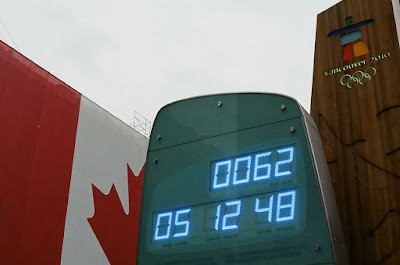 The idea for this photo is courtesy of Jen. I had written down "loud colours", "bell or whistle or some noisemaking device", "traffic, hustle and bustle", "somebody screaming". Jen suggested "Canada Corner": a humongeous scaffolding cover printed with the Canadian Flag, on the Hotel Georgia at the corner of Howe and Georgia. The idea being loud national pride.

This one was difficult to compose. I walked up and down both sides of the street, near and far, crouched, stood on top of mailboxes, all the time cursing my inability to change focal length. There was just too much distracting stuff around (lamp poles, pedestrians, trees, other buildings), and looking straight up from a close position wasn't an attractive option (in my opinion.) I decided to force the flag to share some of its attention with the Olympic countdown clock in front of the art gallery. I was there for quite a long time experimenting with positioning until I found just the right spot that hid the buildings and the trees and overlapped things nicely. I used a small aperture to get adequate depth of field, and at the last minute put on a polarizer to minimize the glare in the front of the clock. Metering was tricky, as I'm not very used to my camera's centre weighted meter. As you can see, the sky fooled me into underexposing the photo. 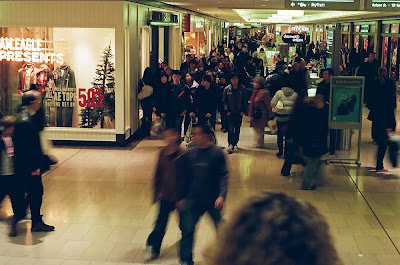 My interpretation of "Wild Goose Chase" was of holiday shoppers (several other participants had the same idea.) I wanted a slightly elevated view point, to get a good perspective of the crowds (oh, and there were crowds.) After some wandering around Pacific Centre mall, I ended up taking this shot while riding down the escalator. I used my tripod with the legs folded in, to help steady the camera at 1/8s, so I could capture the motion of the shoppers. I took the photo just in the nick of time, as immediately after I took the shot (while still on the escalator), I had a security guard tap me on the shoulder and request my credentials. He was fair enough, and after I explained what I was doing he said I would still have to sign in at the security desk, but allowed me to leave given that my objective was satisfied. 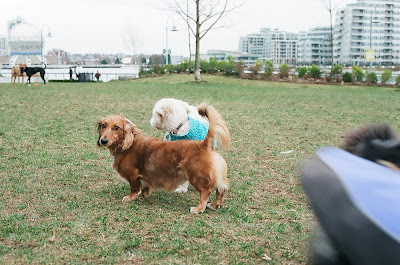 I was about to head home to photograph the cats when I remembered there's an off leash dog area in Yaletown. Luckily, there was a group of 5 or so small dogs playing. I obtained their owners' permission, squatted down, and waited...

This was going to be tough. Manual focus, dogs running everywhere, grouping, disbanding, coming near, going far. Only one chance to get that decisive moment. One dog was trying to hump another dog, and I missed it. Eventually, 5 dogs played in a group. I took the shot, but was a bit late and ended up releasing the shutter as 3 of the dogs fled off to my right, while two of my subjects stood there looking very un-wild. Damn. I missed. 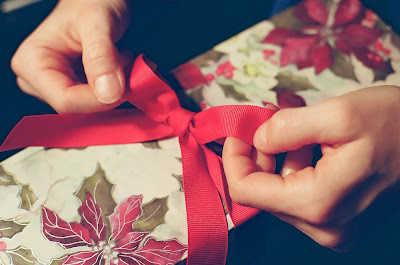 Losing steam, I went home to help Jen with some gift wrapping. I think this picture was a bit of a cop-out, and am not particularly excited about it. It looks decent enough, but had I tried a bit harder I might have come up with something better.

I used an incandescent upright lamp for some nice warm light, and a wide aperature for shallow depth of field and softness. I'm not sure why it's so foggy though. The black looks dull and grey. I look at this photo and think it's from the 70's. I'm OK with that, but a bit puzzled as to what is the cause. 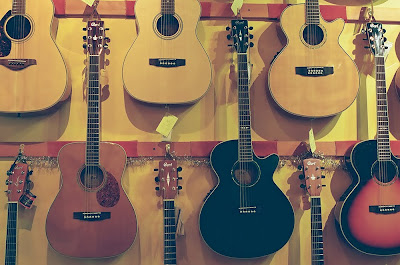 I was at first thinking theatre, or car. Then I remembered there are some music shops down by Broaway and Blanca, so out I went to Rufus' Guitar Shop, where the owner was kind enough to let me take a photo.

It didn't turn out like I hoped. Dull and foggy, like the previous photo. The wall of guitars as I remembered it was dimly lit, but lively, sparkling with the store's small halogen track lights reflecting off of the chrome fittings and varnished surfaces. None of that shows up in this picture. Perhaps I just don't remember it correctly, and I only imagine that the scene was lively and beautiful. 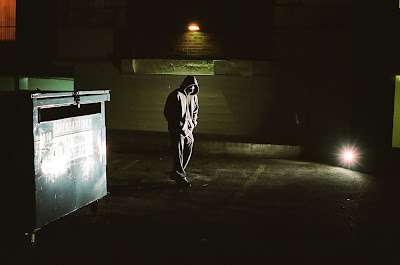 Amazingly, this photo turned out just as I had planned it, better even. I wanted to include the flash in the frame, and get a nice starburst out of it. So I thought up a scene with a strange figure (me) walking through a dark alley. This took some major guesstimation. I found this spot behind my apartment with an empty parking stall, dumpster, and dim light on a brick wall. Perfect. Now to set it up. Made a guess at the flash power setting, and probably overdid it by 2 stops. The starburst turned out nicely though. I knew that the shiny new dumpster would give me some glare, and perhaps I should have pulled out some cardboard and covered part of the dumpster surface. Flash gels would have helped too, so I could have matched my flash colour with the wall light. This photo was the winner for its theme. 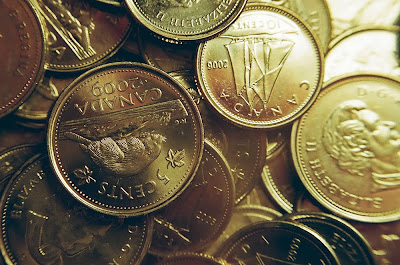 This was also a bit of a cop-out. Dig out some nickels and dimes from the change bin and take a macro shot, theme done. While I think the resulting photo looks nice, I could have been a bit more imaginative. Although I don't feel so bad because several other participants did the same thing.

I did the ol' reverse lens trick for this one. I should really get a reverse adapter, so I don't have to hand hold my lens for macros. For metering, I metered with the lens on (forwards), at f/1.8, and then dropped the shutter time by 4 stops for the actual photo at f/8. I'm not sure if this is technically correct (due to the difference in focal length when the lens is reversed), but it apparently worked in this instance. Whew. 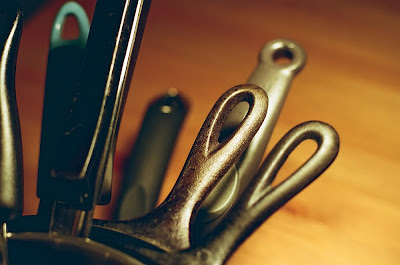 Turns out I wasn't the only one to take a photo of pan handles for this theme. Many participants took pictures of chefs at work through order windows, many went to the kitchen section of department stores, and I set up another psuedo-studio shot on my dining room table with the desk lamp. Credit to Jen again for the setup.

I suppose I should make some overall concluding remark here. I can't think of much for now (as I'm in a rush). The photo marathon was awesome and I'd definitely do it again, although I would try and spend more time at home base (and not at home) so as to more fully engage in the social aspect of things.
Posted by Mike at 3:07 PM

Mike
I am a PhD candidate in computer science at the University of British Columbia. Sometimes I take photos; sometimes they turn out.